The “German – Chinese House”, the only two-storey building of the EXPO2010, whose structure is based on an innovative bamboo construction, is located at the center of the European EXPO Zone. At the same time it is also the only bilateral project of the EXPO2010, namely a joint appearance of Germany and its host China. With its load bearing bamboo structure in combination with transparent ETFE membranes, this outstanding project was nominated as one of the most innovative structures of EXPO2010. 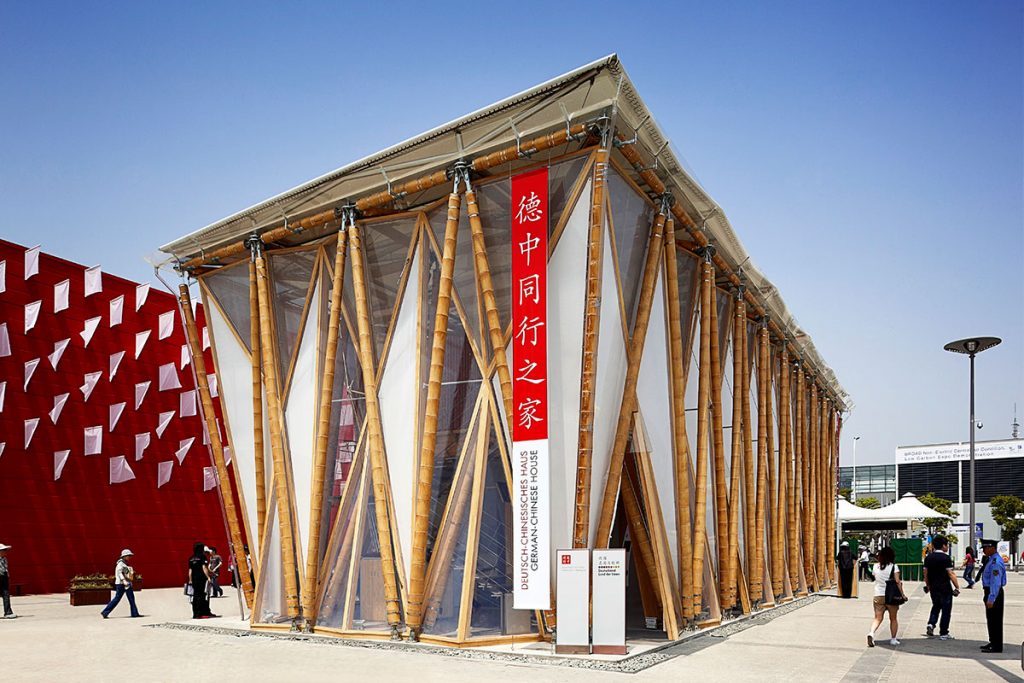 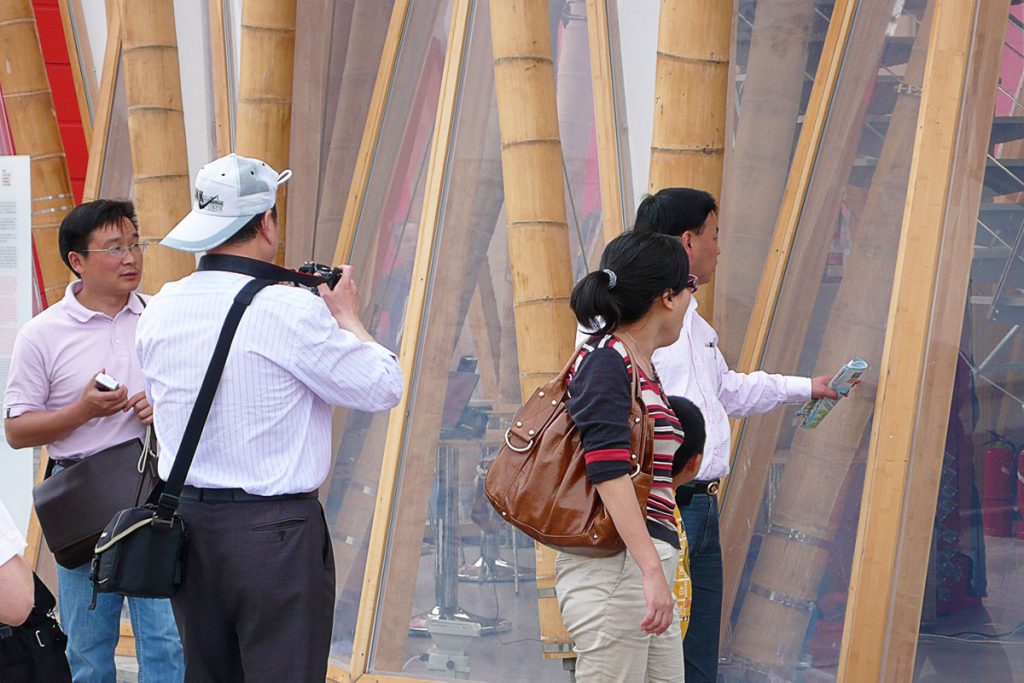 This multi-functional “German-Chinese House” provides space for an exhibition, the interactive City game of 244sqm on the ground floor and a VIP room of 73sqm on the second floor used for conferences at times. The building was conceptualized in an environment-friendly and mobile way, so it can be disassembled in its components and rebuilt in another place. A new sustainable composite material was deployed in the whole building. 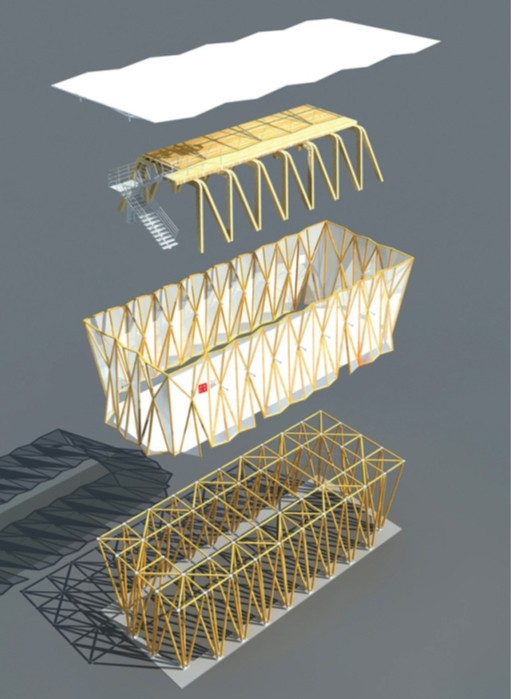 The building was conceptualized in an environment-friendly and mobile way, so it can be disassembled in its components and rebuilt in another place. A new sustainable composite material was deployed in the whole building. The Bamboo battens were glue-laminated with a highly resilient glue to form loadbearing elements. This method is similar to the fabrication of glued-laminated timber beams according to German standards, used for the fabrication of the gigantic frames which support the upper floor. 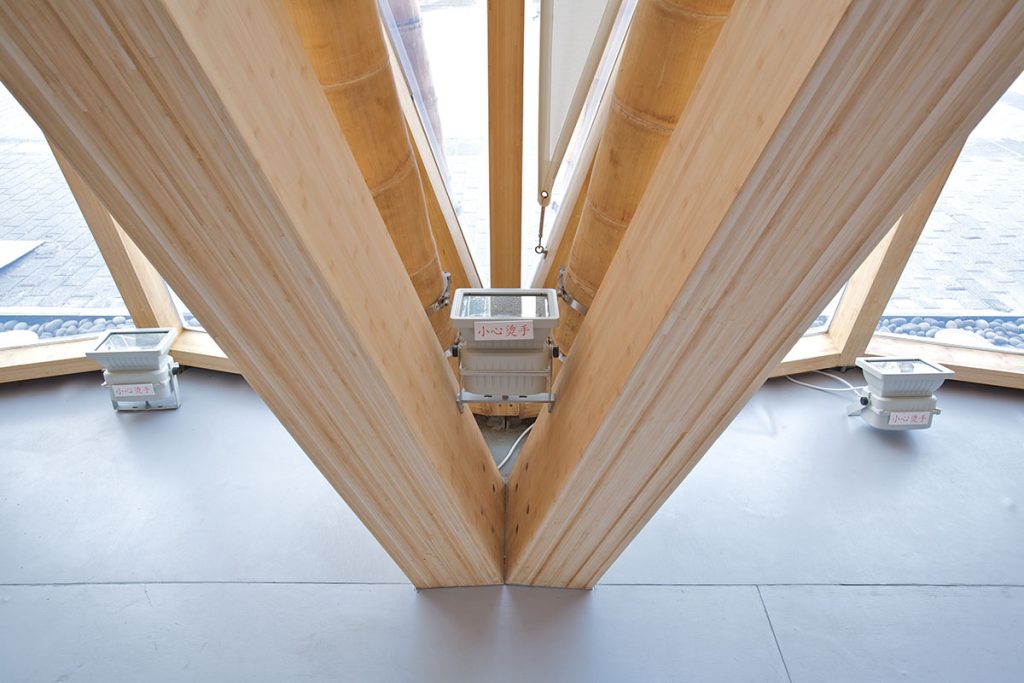 The steel sections of the supporting structure and the façade of the “German-Chinese House” were encased with glued-laminated bamboo. The actual skin of the façade is composed by ETFE-Membrane, which is installed on the bamboo-frame casing. To reach the structural integrity of the independent facade construction, additional stainless steel cables are integrated in the structure. The interaction between the natural bamboo, the translucent shading fabric and the filigree lines of the stainless steel cables, generates an innovative combination of textures and materials. 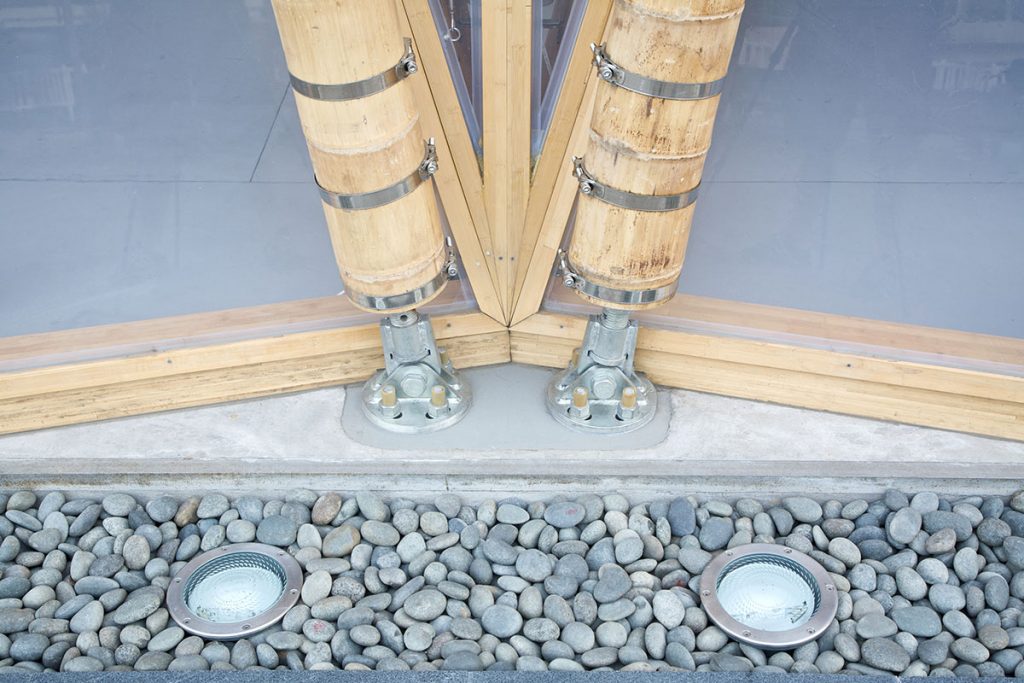 The façade is a successful example of the combination of traditional working method and modern technique, and bestow upon the “German-Chinese House” its characteristic diamond-shaped shell. The game of transparencies and folded surfaces of the facade design are inspired by the traditional Chinese paper-umbrellas and fans. The addition of hi-tech components in the building and the complexity of its structural joints, become the bond and junction between eastern and western cultures. 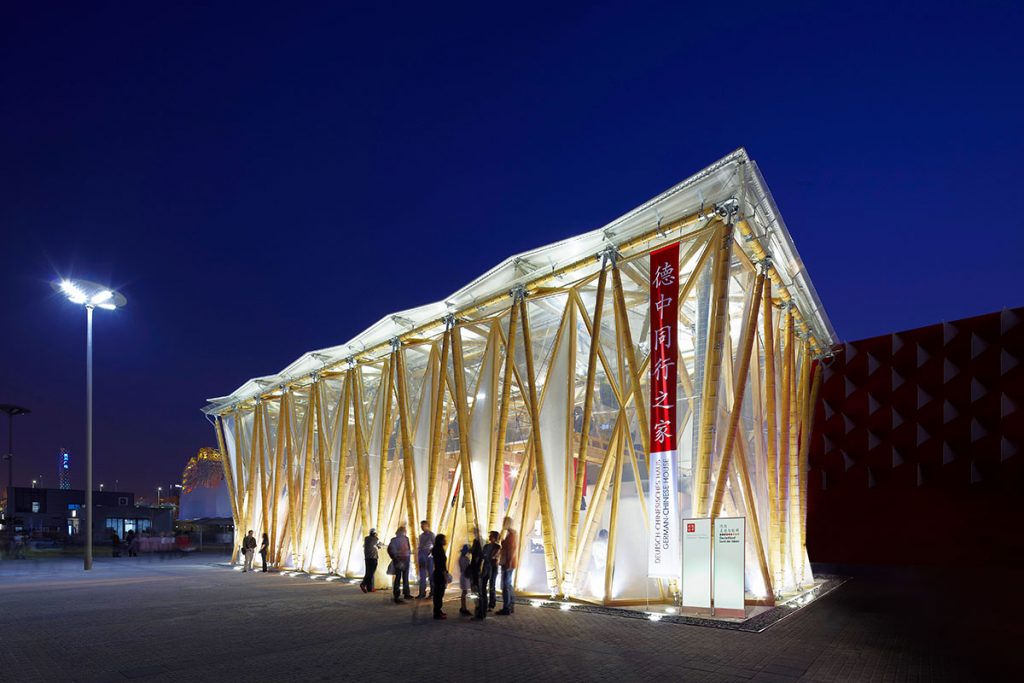 The building was conceptualized in an environment-friendly and mobile way, so it can be disassembled in its components and rebuilt in another place. The planning was a challenge, bamboo is a natural material is never straight. The complete project was developed as 3D model and all dimensions for building parts were confirmed in 3D. 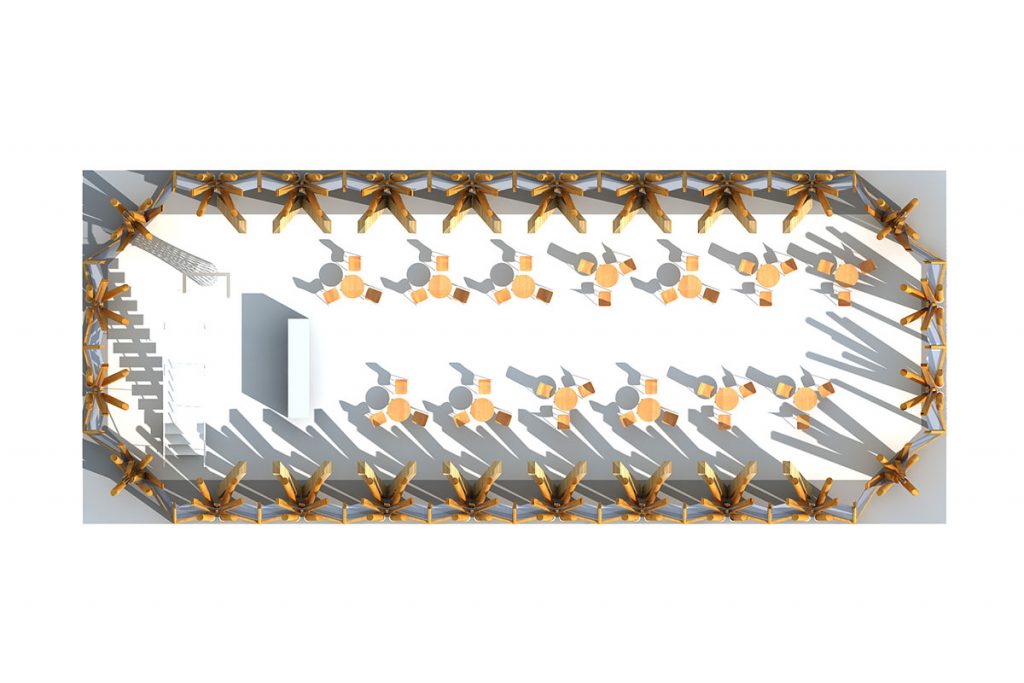 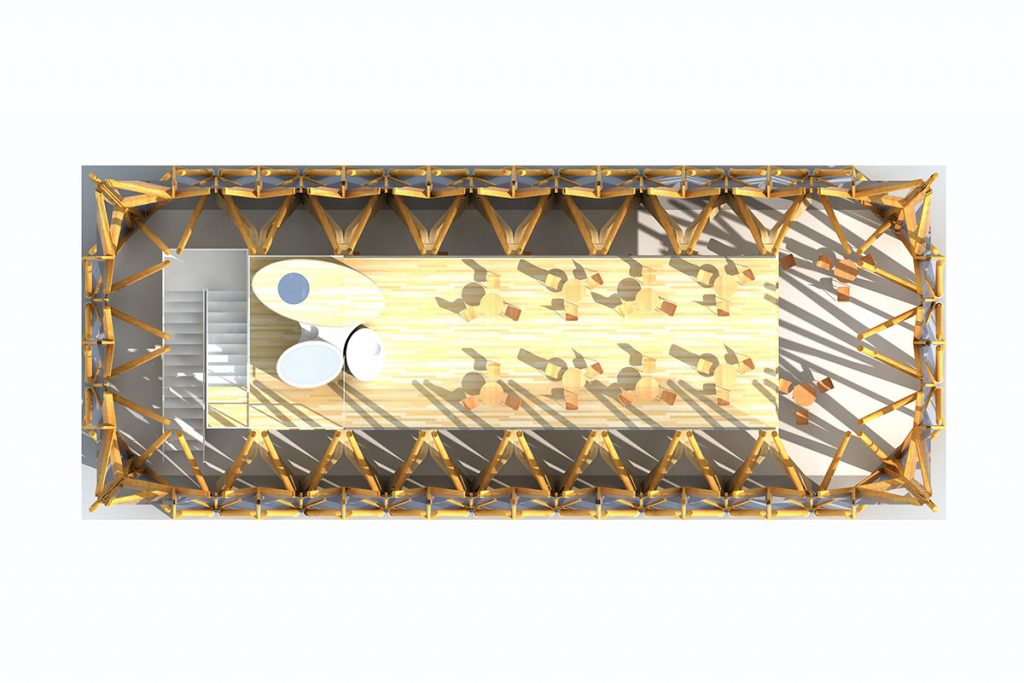 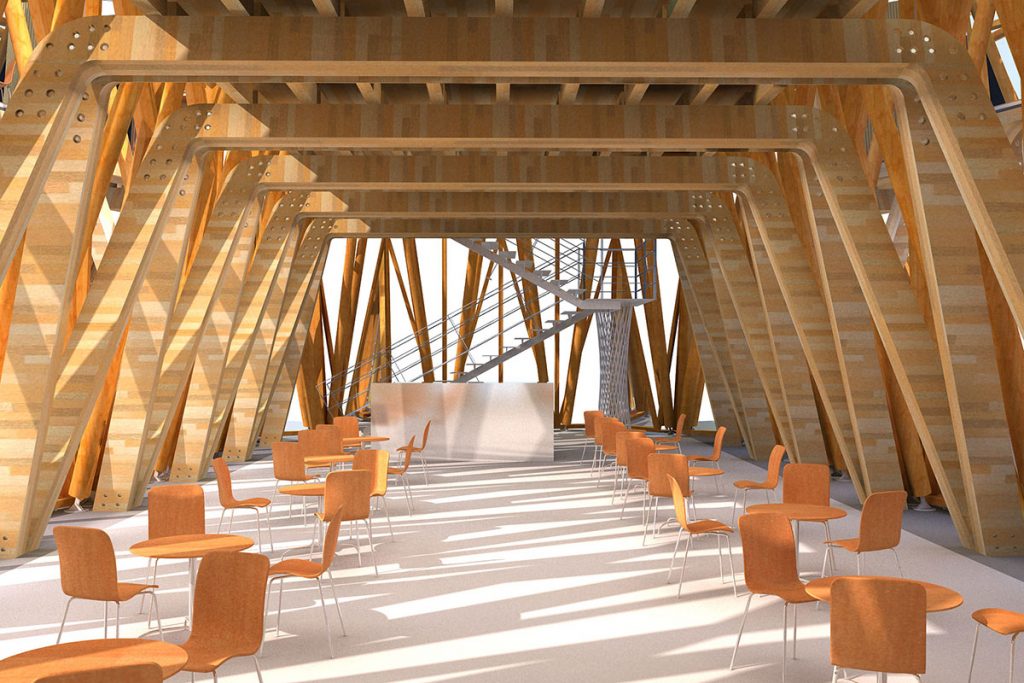 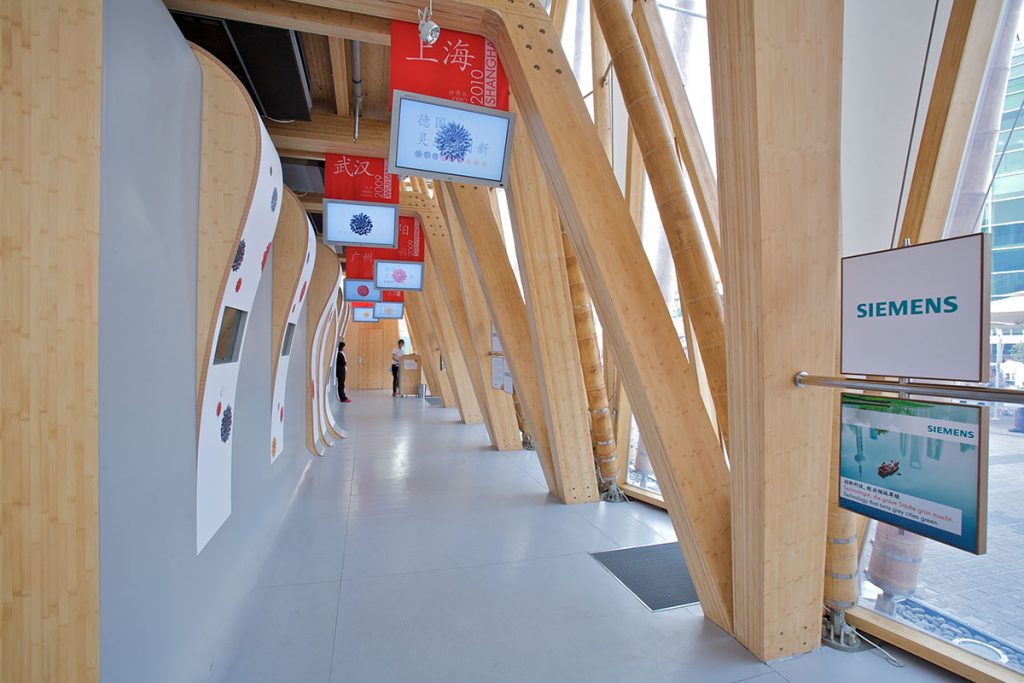 In China, bamboo is available in great quantities and because of its fast growth; it is a sustainable building material. The main supporting structure consists of 8M long giant-bamboo poles of “Julong Bamboo” from the province Yunnan. The bamboo poles were connected by steel knots that were screwed to steel anchors that were casted with concrete into the bamboo poles. The bamboo-concrete-composite was optimized, aiming at a fast hardening concrete which enables an extremely strong connection between concrete and bamboo which can be easily processed. 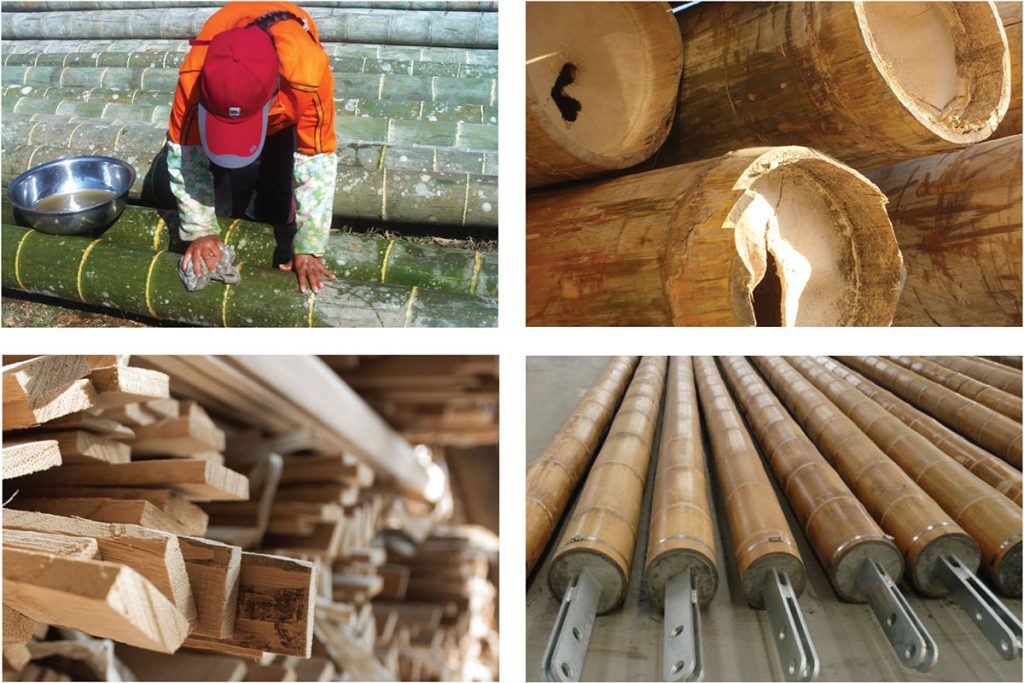