Qingdao, a city that witnessed China’s entire railway history, has developed over the past 40 years into one of the most important industrial cities on the East coast since the reforms opening-up the economy to the West. Today, Qingdao is by far the most important pole for production and innovation in the railway transportation field in China and it’s recently getting increasing international traction. 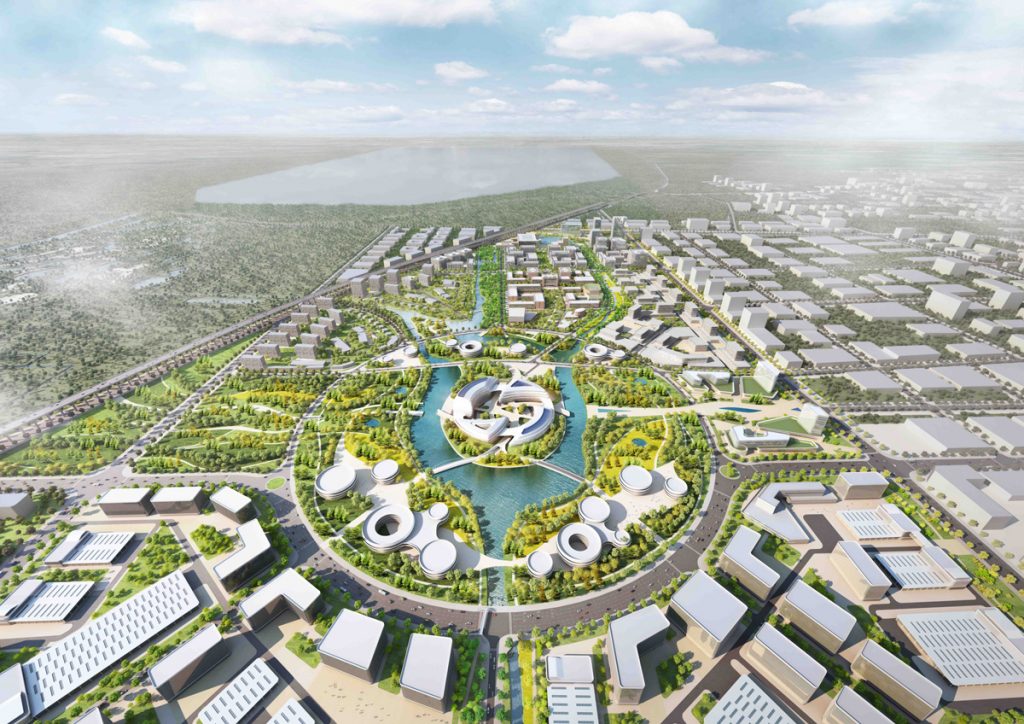 High-speed railway has become an important symbol of China’s global influence. The National High-speed Train Tech­nology Innovation Center is set to assume a key role in China’s international ambitions in the field of high-speed train technology. Its aim is to showcase worldwide the next generation Science and Technology Parks standards becoming the benchmark for oth­er industrial parks in China. Located in the northern coast of Qingdao, the Innovation Park can rely on a very strong infrastructure system serving other adjacent industrial and hi-tech areas. Jiaodong International airport, Liuting airport and Qingdaobei sta­tion, together with a recently built system of high-speed roads and a future subway, will allow reaching the Innovation Park grounds quickly and efficiently. 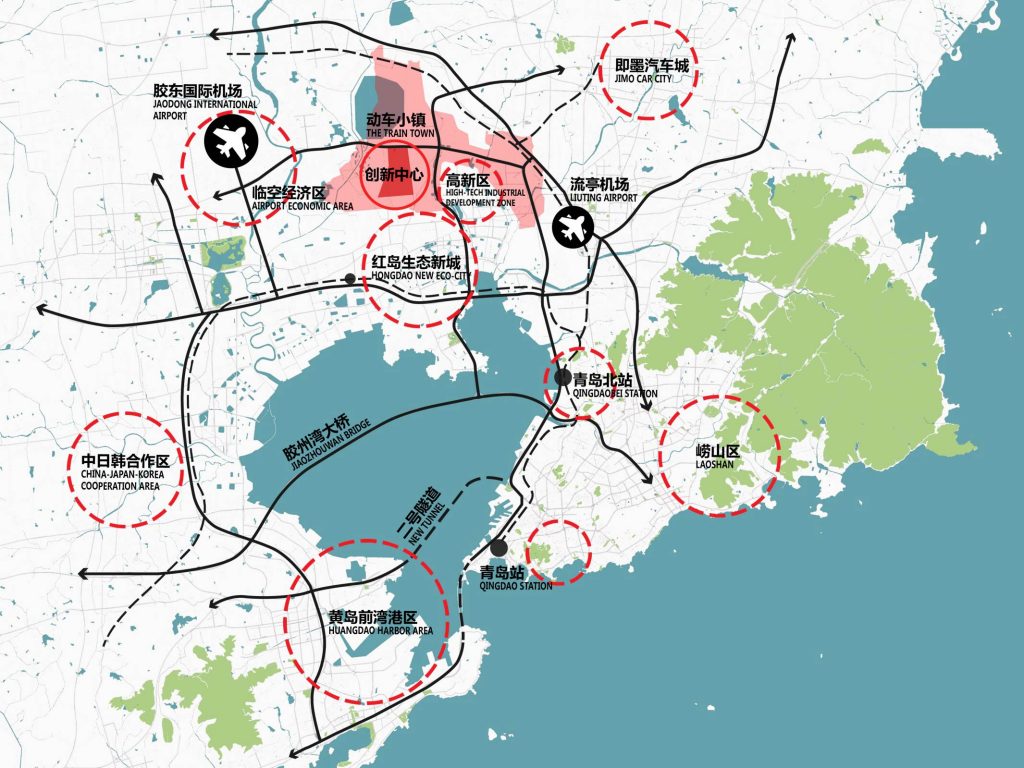 The innovation Center development is arranged in two phases. The first phase has the largest area and is the main scope of our design. The total area is around 380 hectares, about 300 hectares of which are agricultural and forestry land, ac­counting for 80% of the total area. The remaining area is occupied by villages and minor industrial developments where warehouses, small factories and greenhouses are the only built facilities. 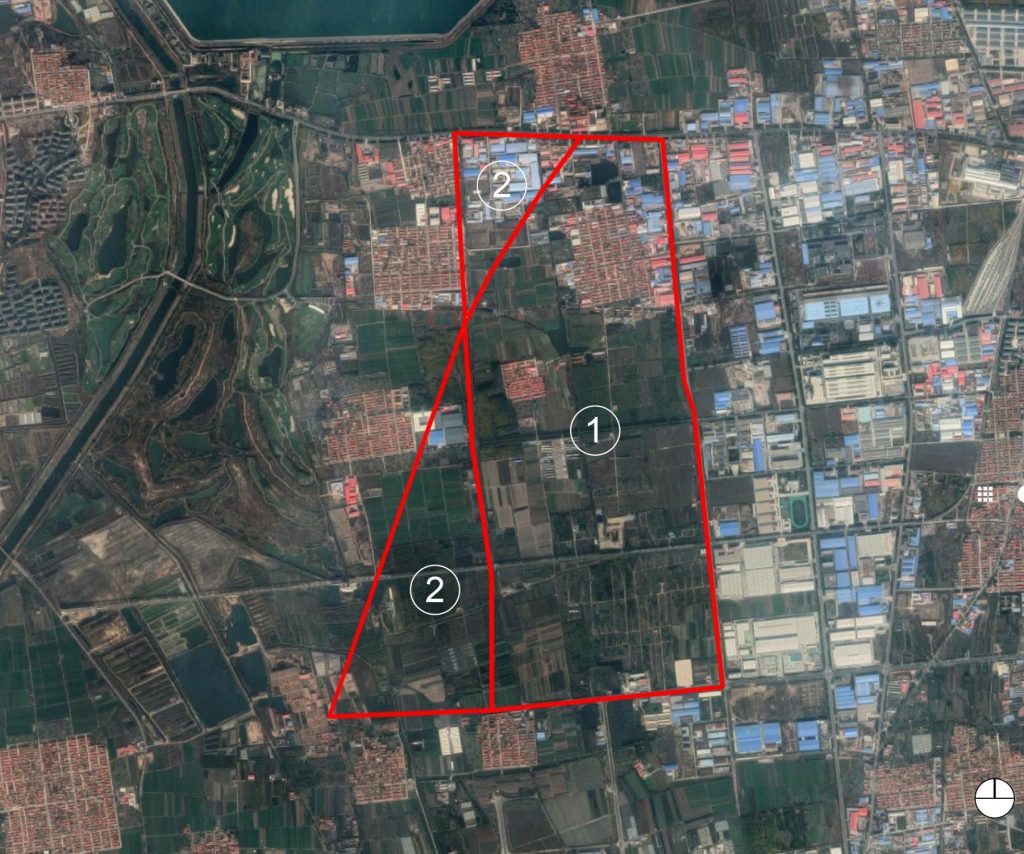 The natural and rural elements on site are predominant and therefore need to be protected. Due to the unavoidable impact that such an important intervention will have on the local rural community, our objective is to respect the existing built and natural environment whilst preventing the loss of local culture.

We developed our master plan framework following four steps, adjusting our strategy to an increasing level complexity. In the first stage we assess the location of the plot as a transitory land between nature and urban fabric: the ecological wetlands of Taoyuan River on the west side are introduced into the site as landscape elements, whilst the suburban tranquility of the village on the east side finds a counterpart in the dynamic vitality of the development. In the second phase, we establish a center that will be both the green heart of the development and its main engine of innovation. The third phase shows the connections of all the adjacent zones interlaced with the core area which assumes an iconic circular layout. In the fourth phase the four main elements of the development – Innovation, Nature, Production and Urban development – are distributed in four functional zones intertwined with revolving around the central ring. 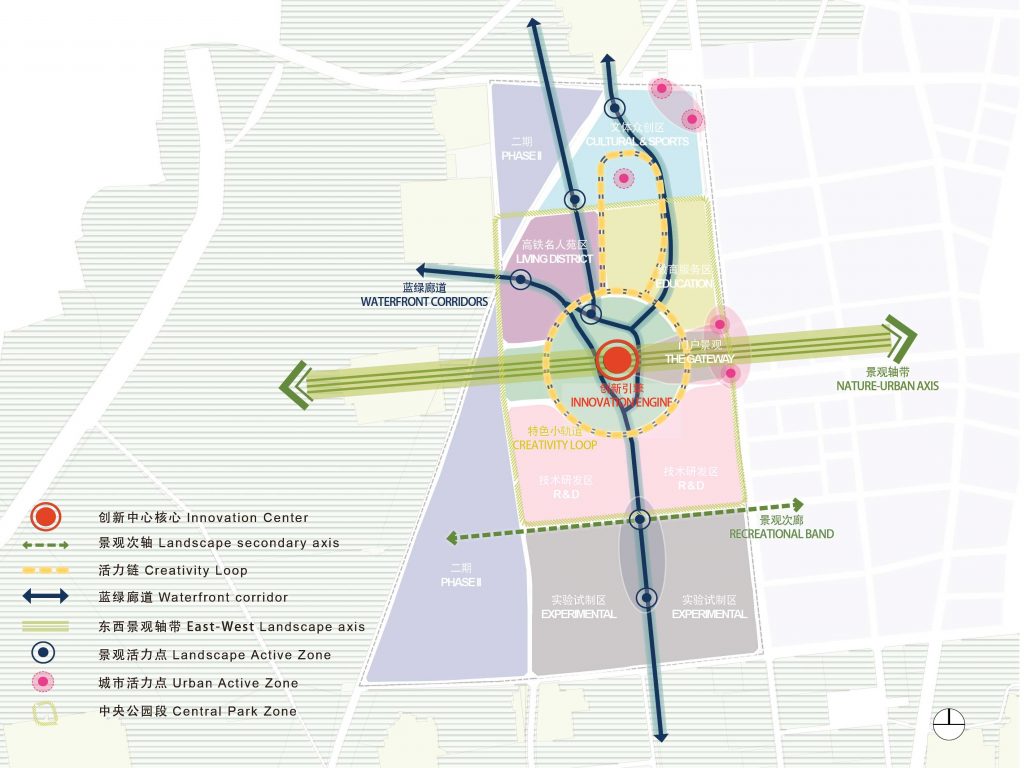 The program is distributed in six large districts with a progressively lower building density from East to West and towards the center. The main infrastructure of the test railways divides Phase 1 and 2 into two parts: to the South, further away from the living quarters, is the Production and Test District. To the North, beyond the test railways, is the R&D District where cutting-edge laboratories develop the new technologies to be tested for further production. Culture & Sports District, Living District and Education District crown the North of the Innovation Park, providing the service facilities and young talents from the academic world indispensable for the Park’s thriving development. 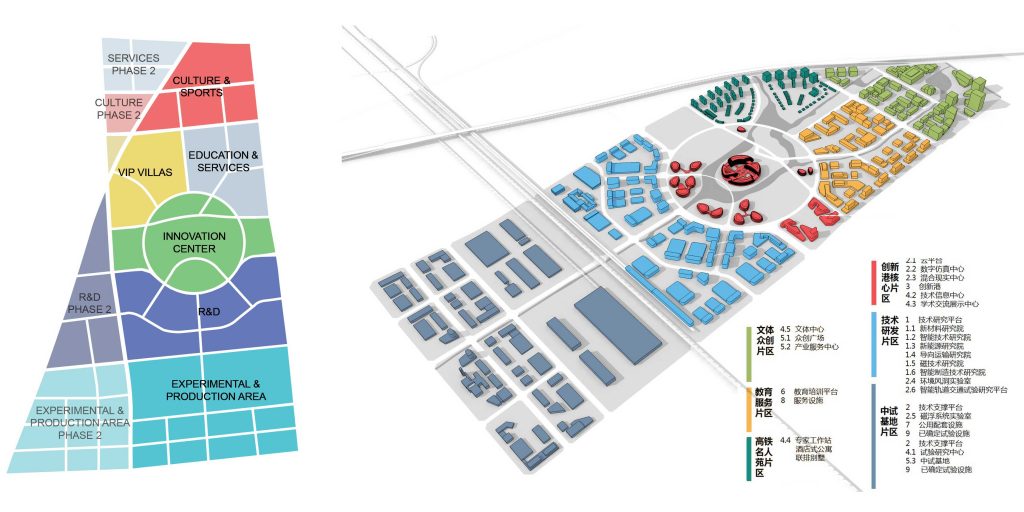 The central Natural Green Park retains natural vegetation, water and soil, playing a key role in the ecological regulation of the entire development. The water system combines and extends the existing canals and wetlands with natural shorelines, highlighting ecological features, respecting nature, and forming hydrophilic active areas along the waterfront. The central green is extended through the introduction of green parks into the research institutes areas and along the urban front, equipped with leisure, culture and entertainment facilities.

The forest-style Central Park uses the natural water system to connect the regional ecological blue-green network. The six major functional districts are radially distributed around the central circular park which landscape branches out to reach all of them comprehensively. Water, landscape and architecture merge at the heart of the master plan and create an ideal environment for creation, testing and application. 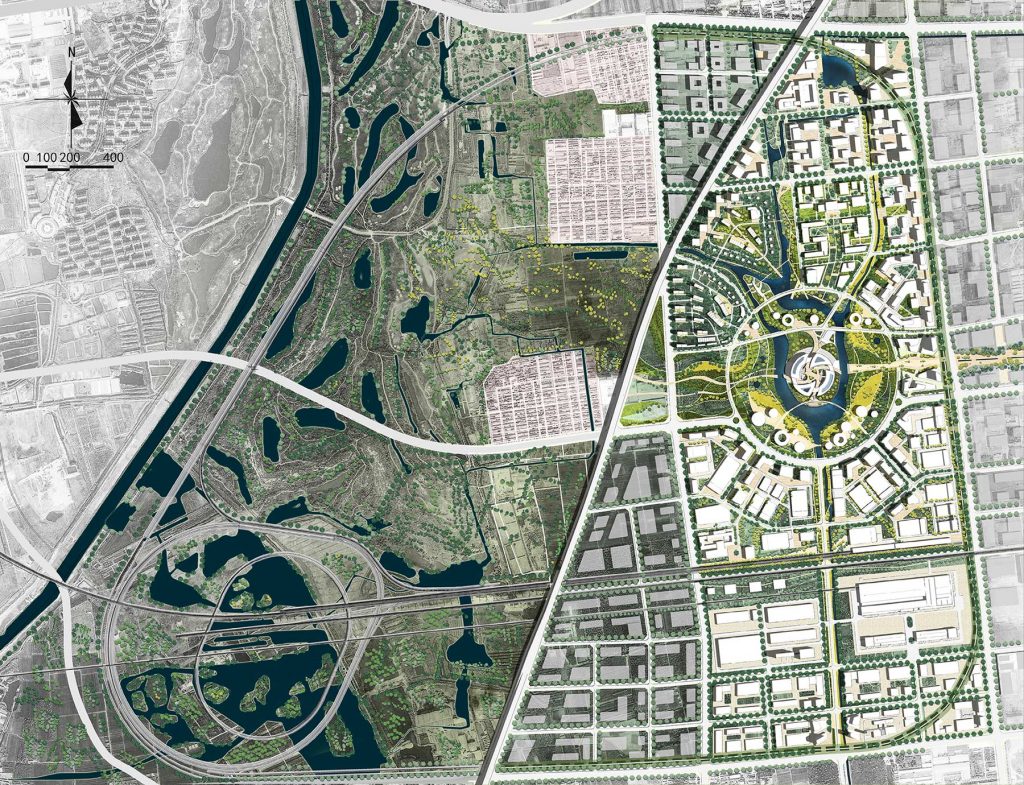 The program contained within the central ring is directly related to the stor­age, analysis, elaboration and broad­casting of information. While the Cloud Platform, the Digital Simula­tion Center and Mix-reality Center deal with information technology and large quantities of digital informa­tion, the Technical Information Center is in charge of distributing and broadcast­ing the data both to the public and to the enterprises working on high-speed railway technologies in the R&D District. 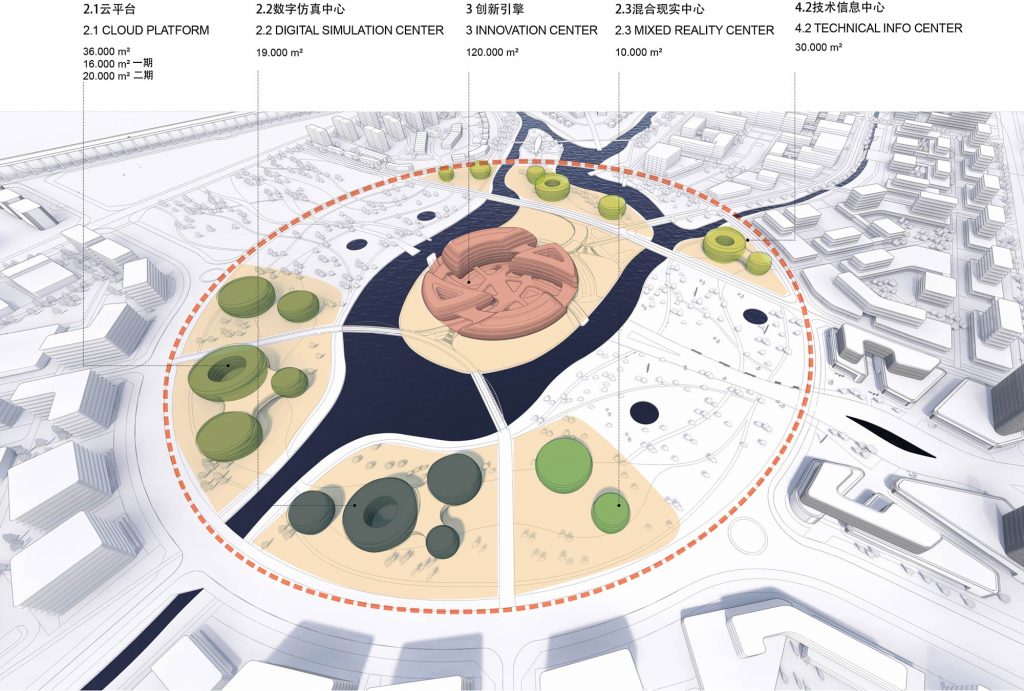 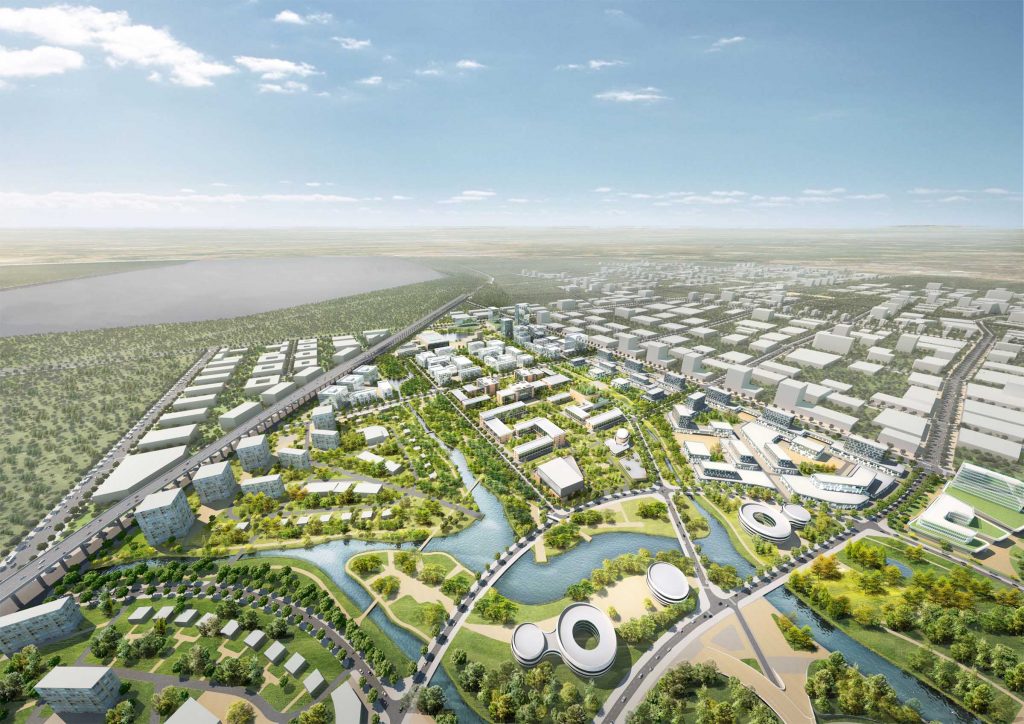 The Innovation Center is the heart and motion engine of the master plan. Acting like a center of gravity, it merges the city with nature and, as a perfectly tuned machine, it combines incubation and production, thus providing the perfect environment for collaboration and innovation. Its functions include scientific research offices, science and technology management, comprehensive service and other representative functions. 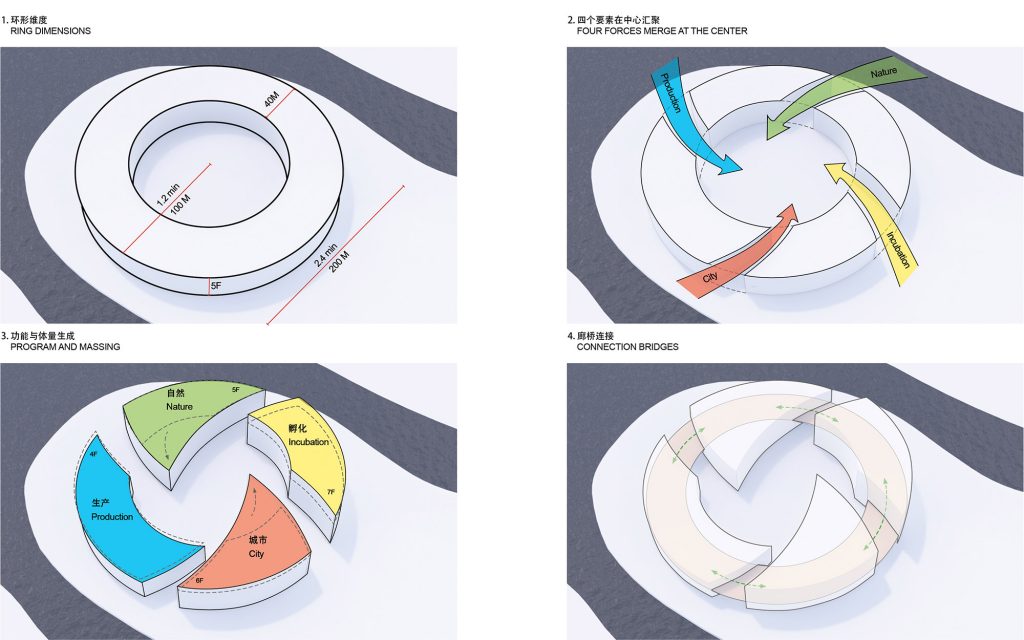 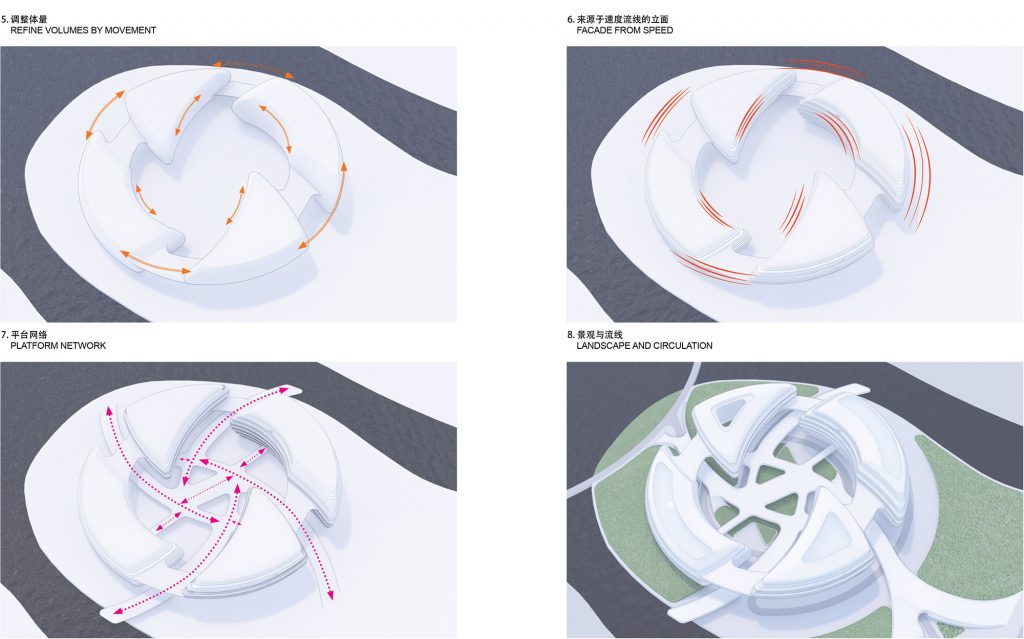 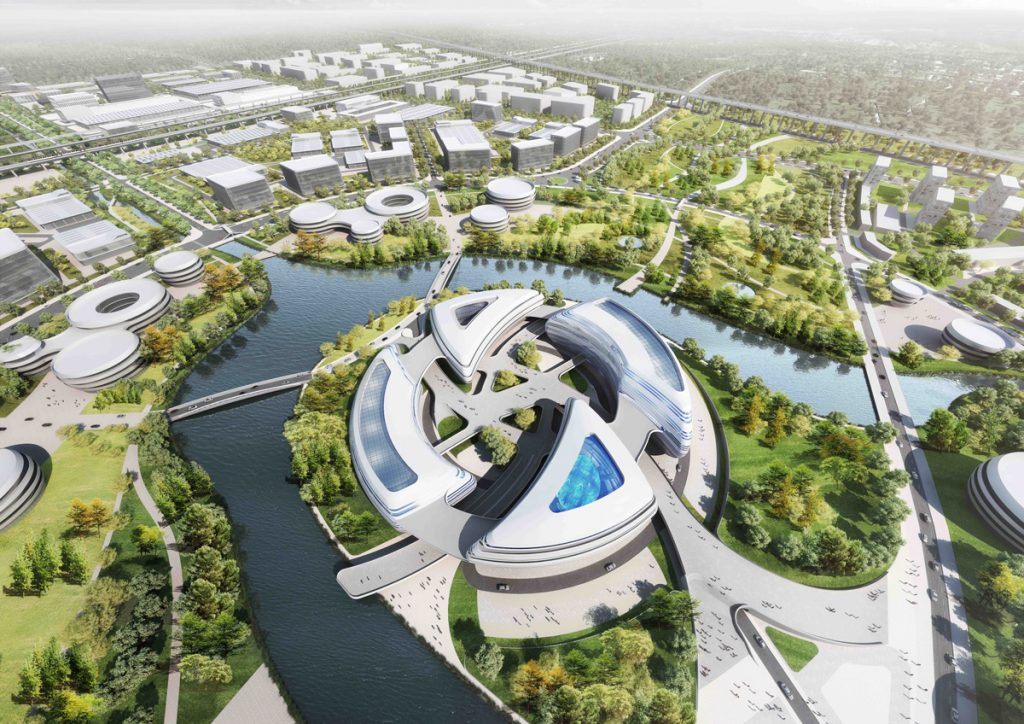 An elevated pedestrian platform connects the four buildings and separates vehicle traffic from pedestrian traffic. Vehicle traffic is exclusive at the ground floor where drop-offs and parking entrances serve each building. Most car traffic and visitors arrive through the north-east plaza, whilst to the South, the island is accessible exclusively for VIP and special events through bridge over the main water body. 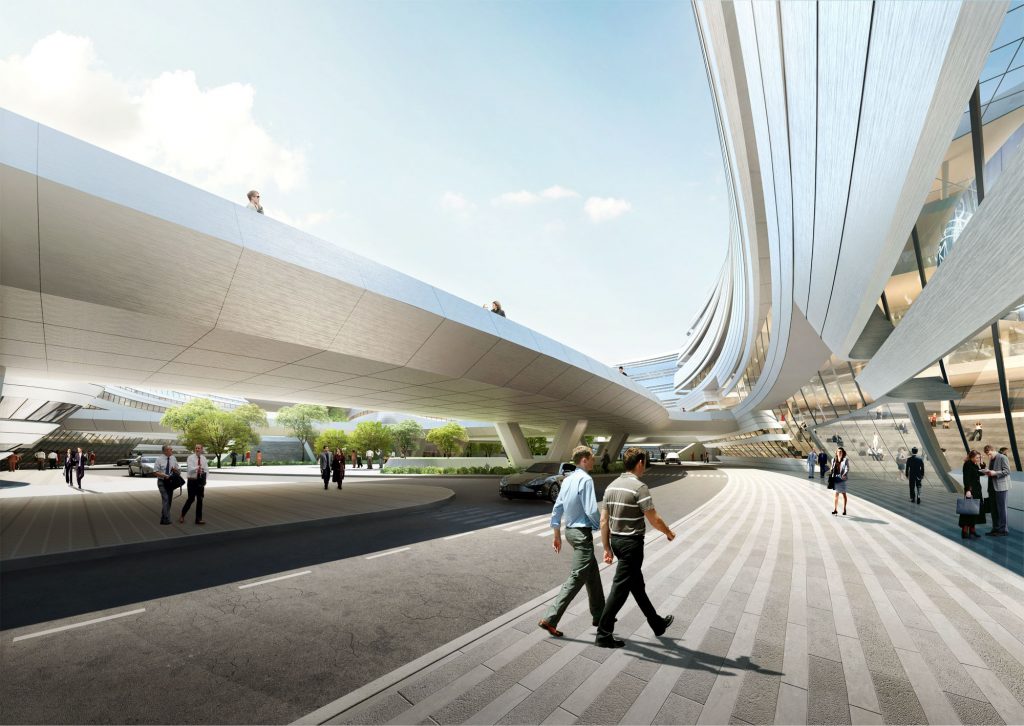 The concept of speed is reflected in a dynamic façade language. Horizontal lines carve the organic volumes of the Innovation Center with different gradients of openness allowing to adapt to the different requirements of privacy and sun-shading of the interior functions. Longitudinal aluminium panels and glass seamlessly blend together creating the elegant make-up of the iconic landmark building of the complex. 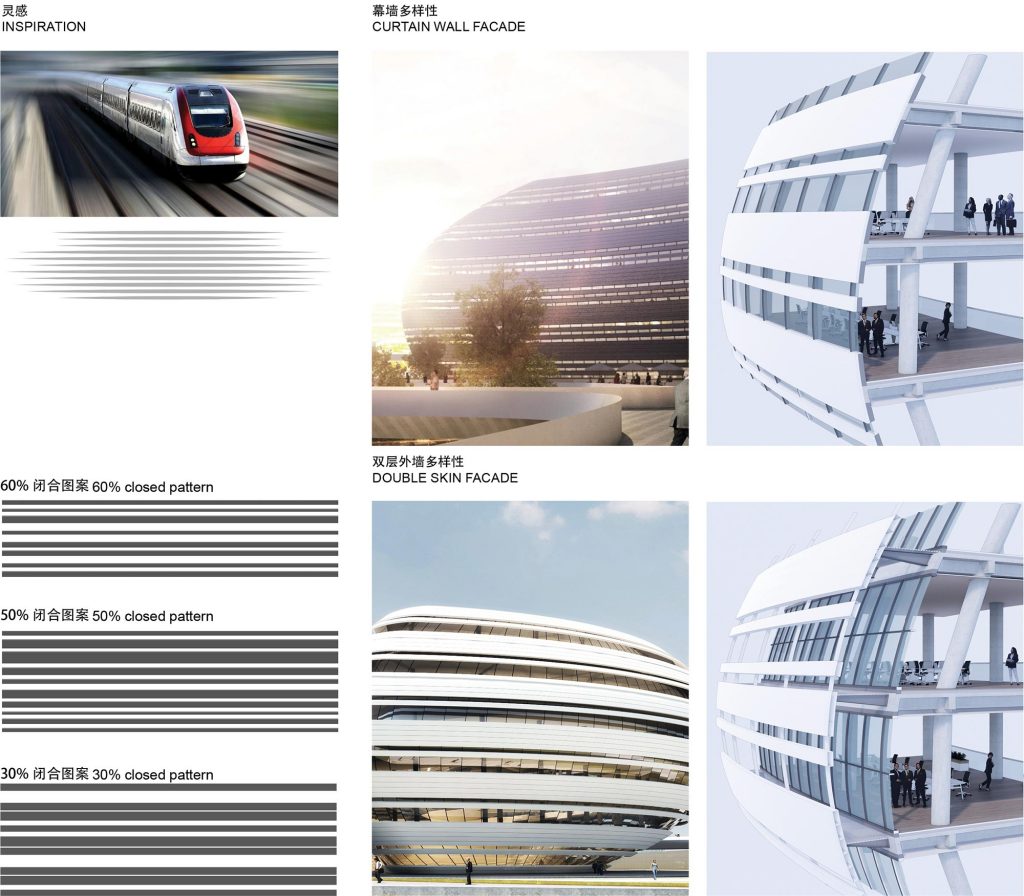 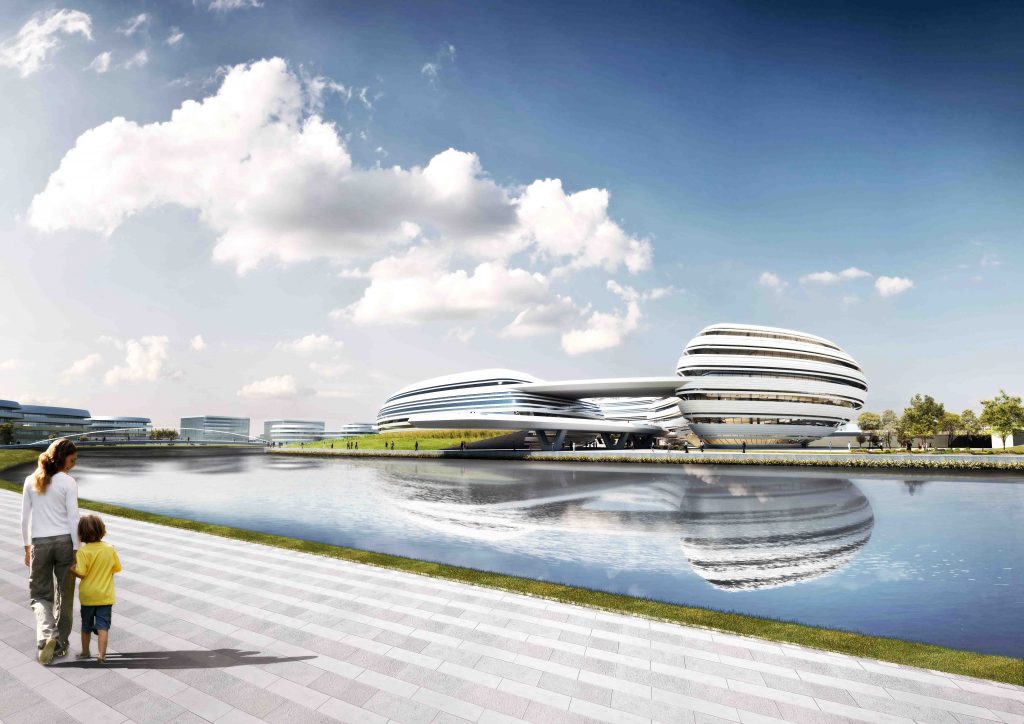 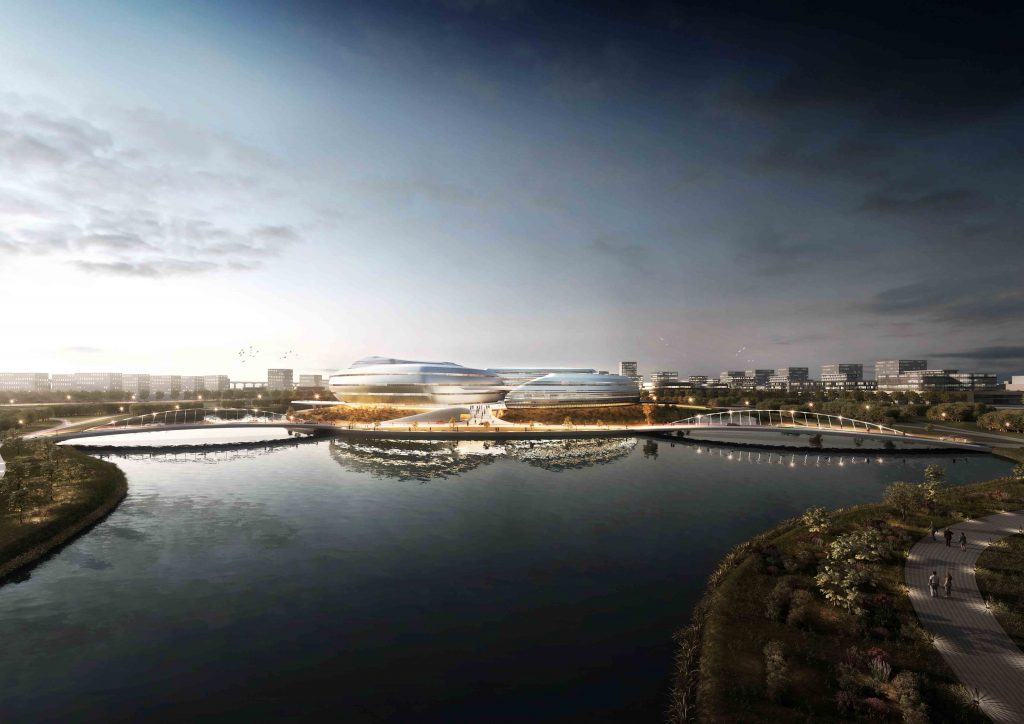 Public and private events can be hosted within the exhibition area. The levitating exhibition hall is accessible at every floor through a network of elevated walkways. 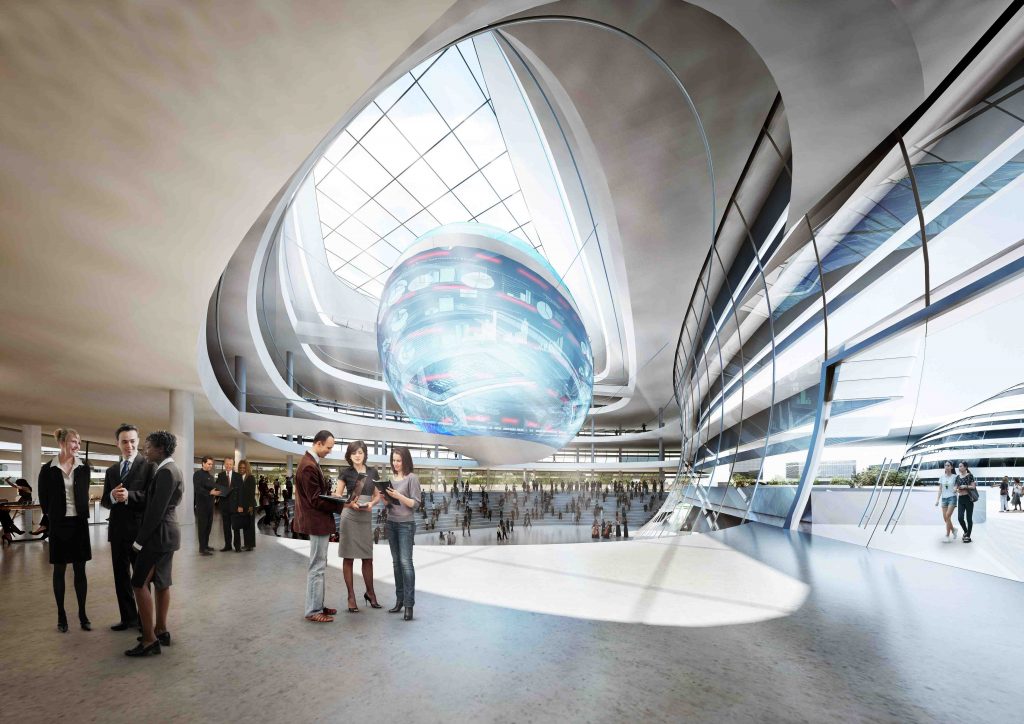 The design of the High-Speed Train Technology Innovation Center reflects the image of Qingdao as a city projected to the future. In this project, science and innovation merge with nature and tradition, reinvigorating an ever-lasting relationship that does not have to be contradictory.