Tianjin Lin’gang Economic Zone is a 220 Km2 industrial district on the coast of Tianjin entirely formed by land reclamation. Its is one of the few Eco-port Economic zones for the production of hi-tech manifacture equipment and machinery in northern China and one of the key functional areas of Tianjin Binhai New District. After more than ten years of development, Lingang Economic Zone is thriving and steadily growing as a coastal “industrial city”. 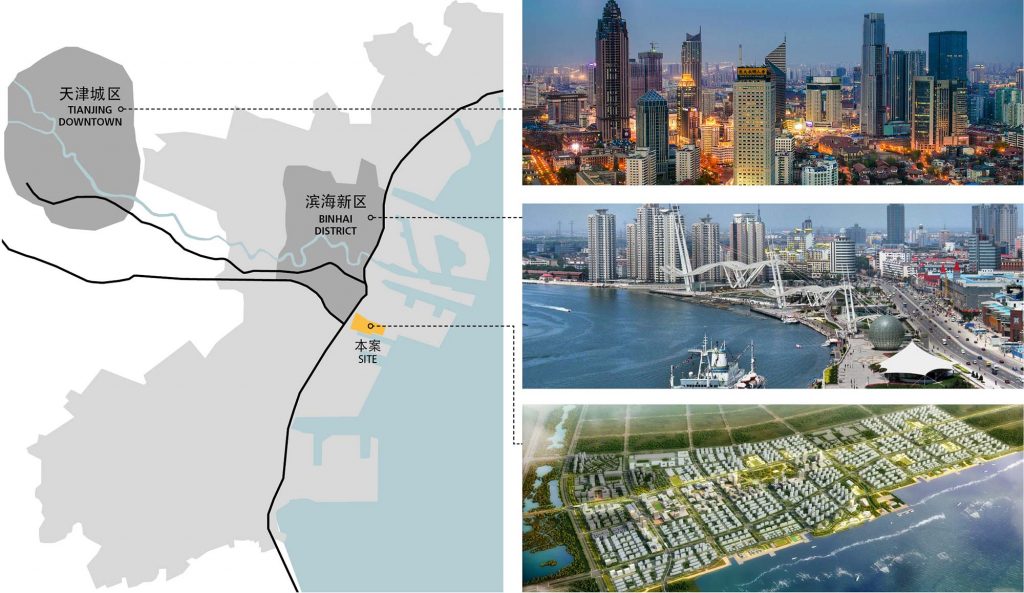 The design scope is the core area of the Economic Zone destined to the China-EU International Exchange and Cooperation Center and to be located at the edge of a residential area currently under construction. The new development is positioned as a city complex intended to become a catalyst for European enterprises to move their production and services to the Industrial Park and, at the same time, to promote the development of the surrounding living areas. 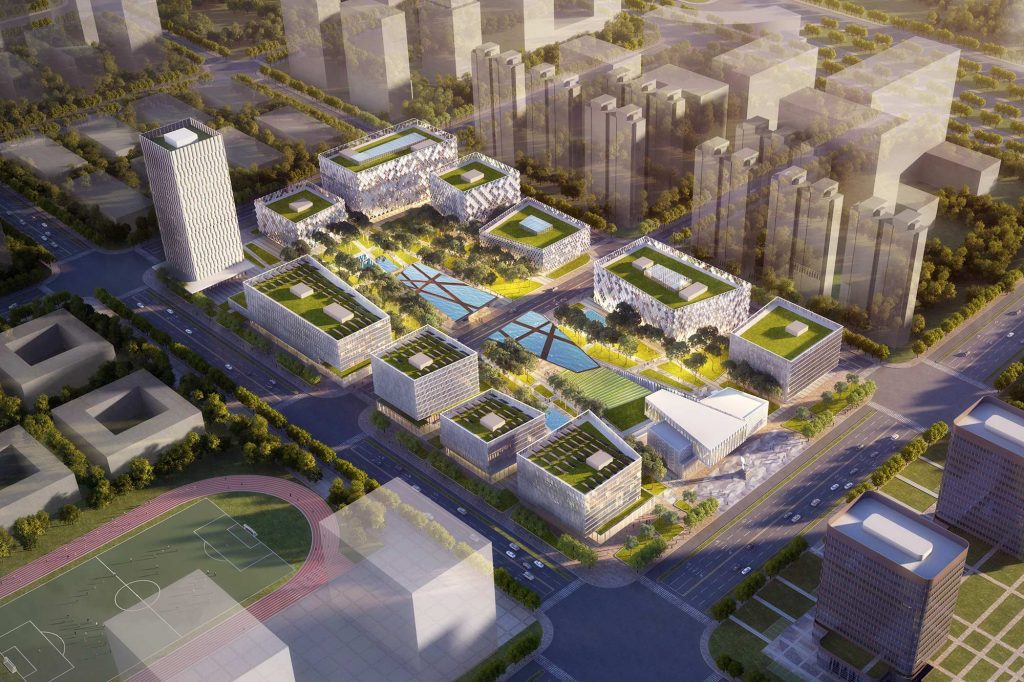 Tianjin is a city with a great history of seafarers which for over a hundred years has welcomed and nurtured trading relationships with the West. Western influence is still visible today in the architecture of several former European concessions – Italian, French and British – located in Tianjin old town area. This important memory of the past inspired the master plan concept design. 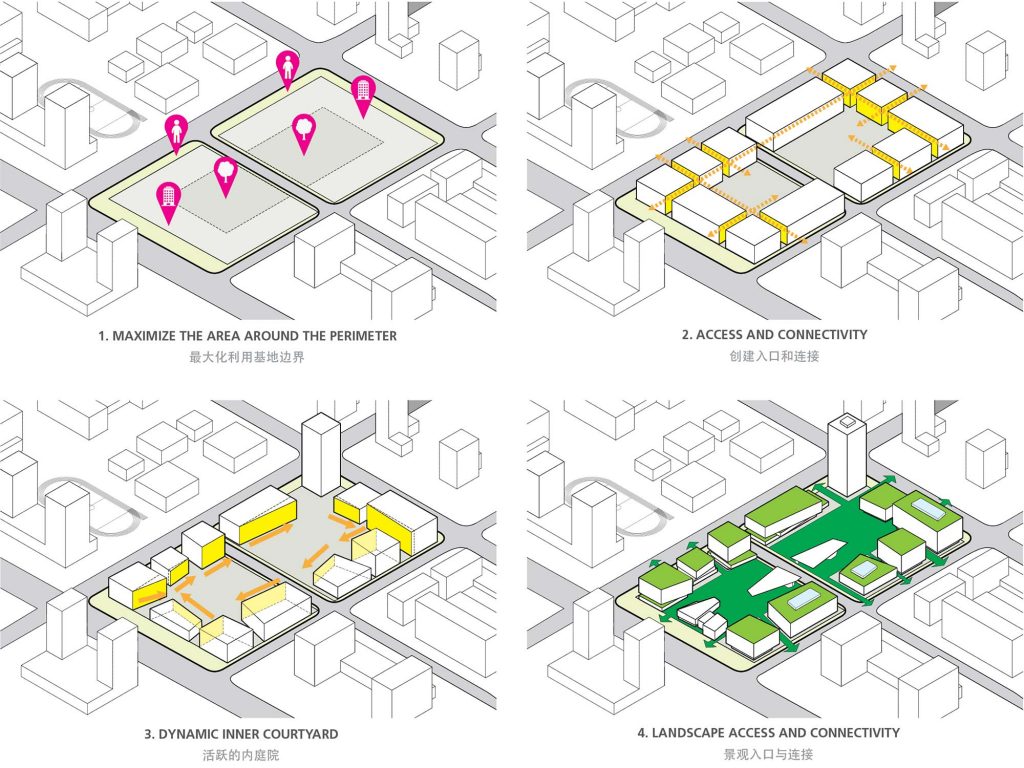 Despite occupying two adjacent plots divided by a road, we decided to unify the whole development through a courtyard layout with a fragmented urban front that allows views towards the inside and ground floor pedestrian accessibility. 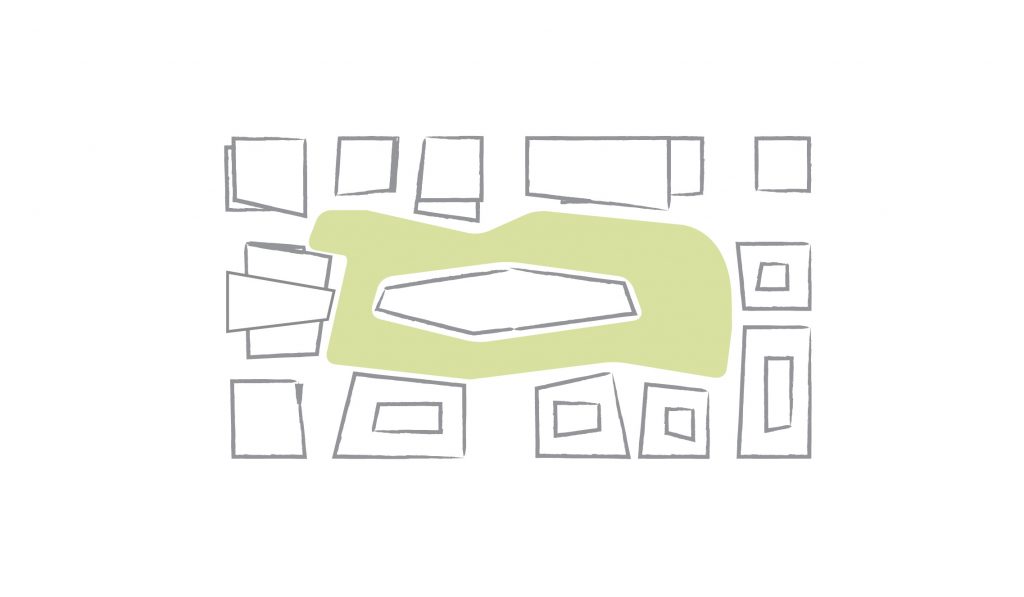 The concept is defined by placing the majority of the office building bulk around the perimeter of the site to create a large protected interior green space. This “Urban Park” is about 100 meters x 250 meters and accommodates public facilities for leisure and sports gathered under two large adjacent canopies located in the center of the two plots. 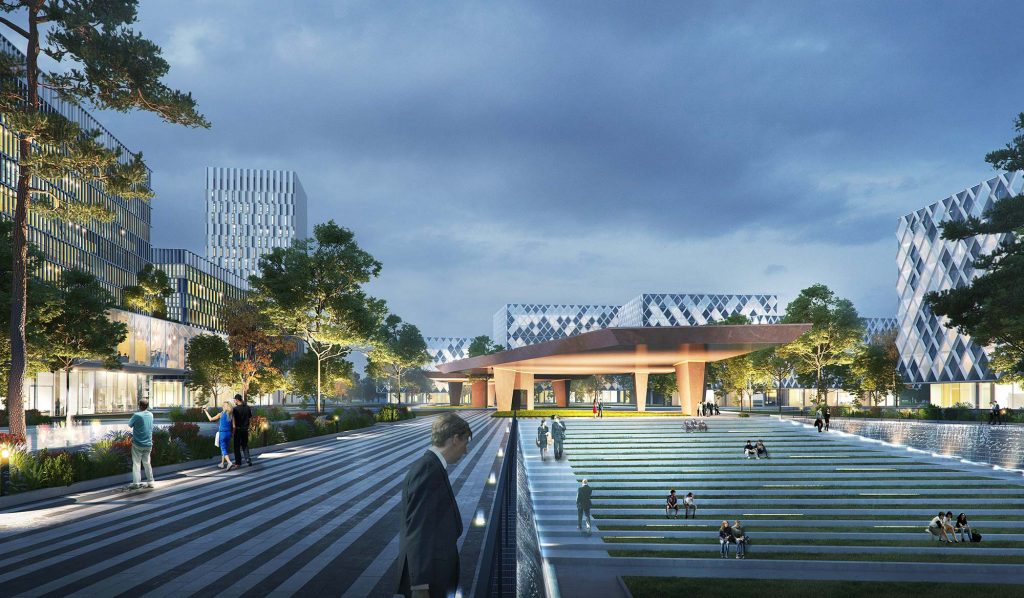 The sculptural shape of the canopies and the raw corten steel in which the structures are covered enhance the landmark role of the structure which help unifying the two separate plots. The rest of the public space of the park includes a sunken plaza for cultural events in front of the Exhibition Center, gardens for workers to gather and water features for reflections and background noise to provide intimacy and interest. 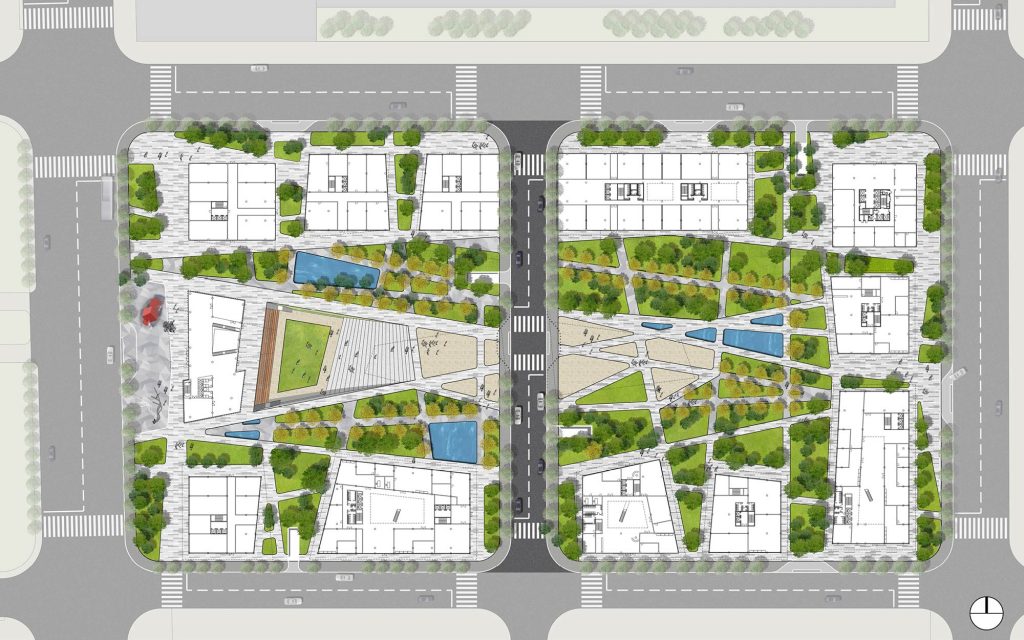 The inner side of the buildings facing the park is intentionally tilted at different angles and oriented in different directions in order to disrupt the regularity of the facade, break down the visual axis and adding areas of complexity and spaces of interest. 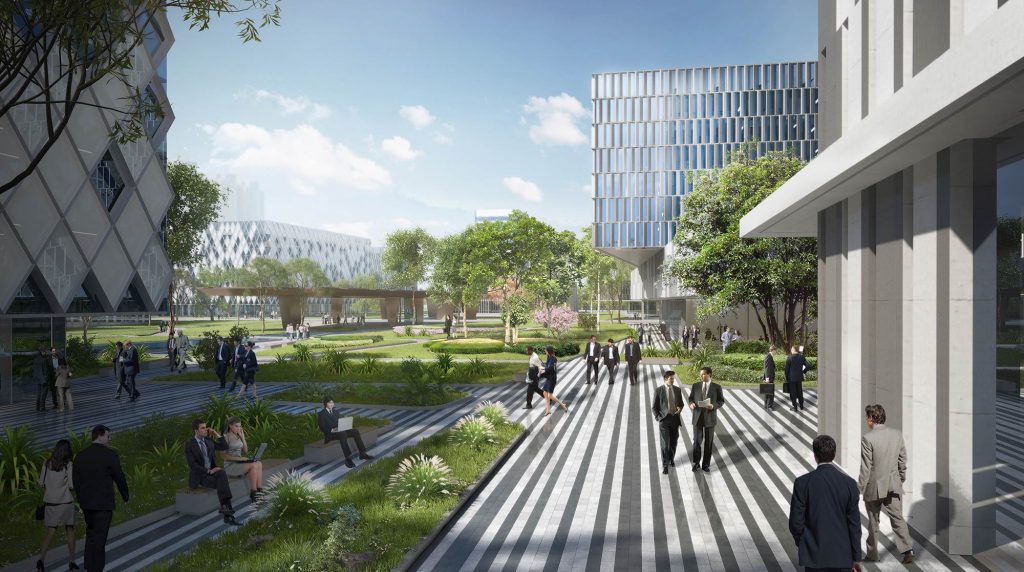 The Exhibition Center is the cornerstone of the complex. Its location was explicitly required to be facing a Government building in the adjacent plot to the West, putting the building in a very prominent position at one extremity of the East-West axis of the development.

Designed on three levels to accommodate simultaneously conferences, temporary exhibitions and product launches by the companies residing in the park, is accessible at the ground level from the representative West entrance and at the first level underground from a sunken plaza. The architectural composition is defined by simple irregular stacking volumes that generate cantilevers covering the main entrance and terraces to enjoy the views towards the inner park. Inside, a triple height atrium accommodates the exhibition area. 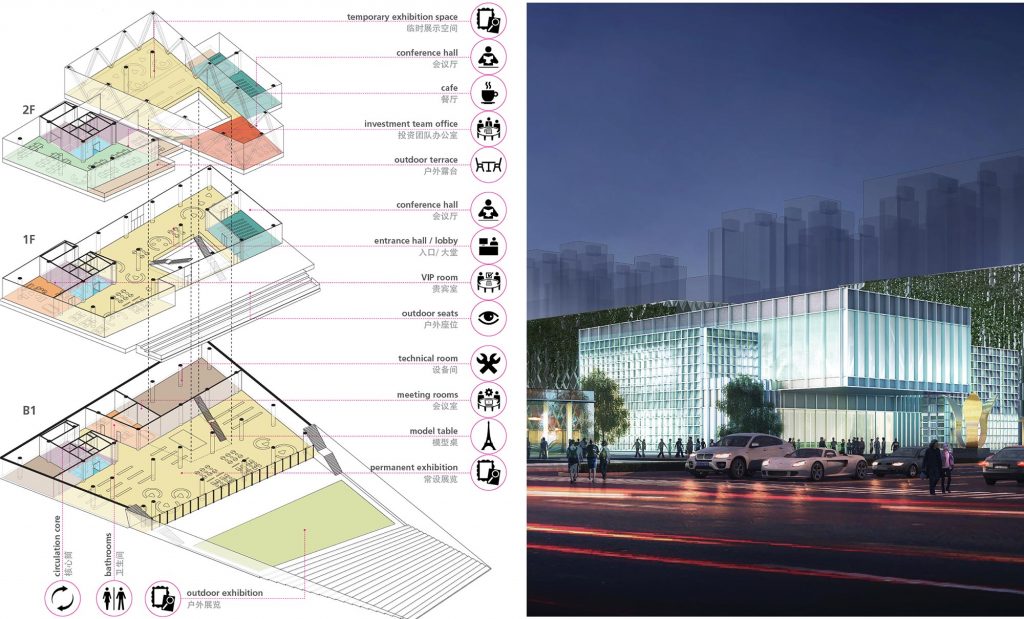 The rest of the program includes offices, research & development laboratories and think tank incubators. These buildings are between four and eight floors high and most of them accommodate supporting commercial facilities and F&B in the podium at the ground floor. The commercial podiums have a larger footprint than the upper floors, allowing large terraces and communal shared space at the second floor for the workers. 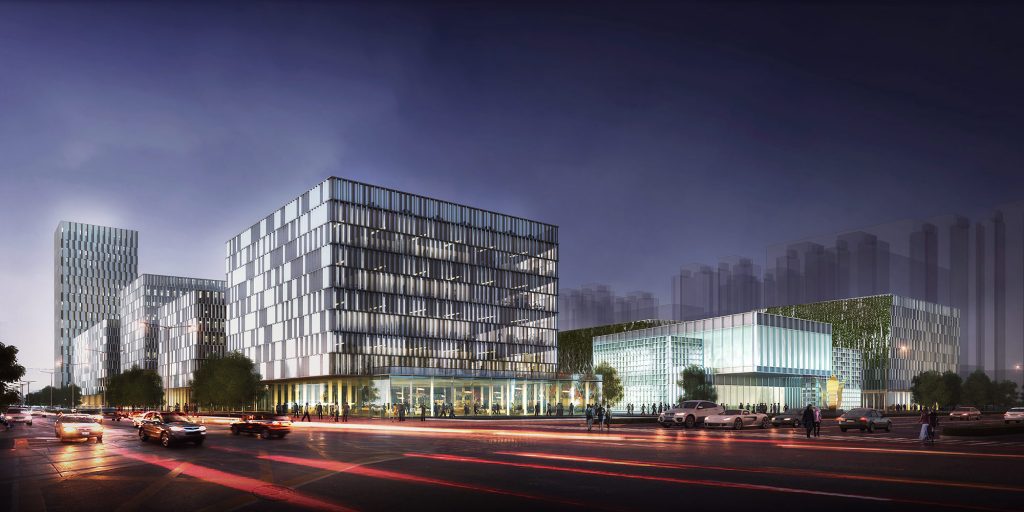 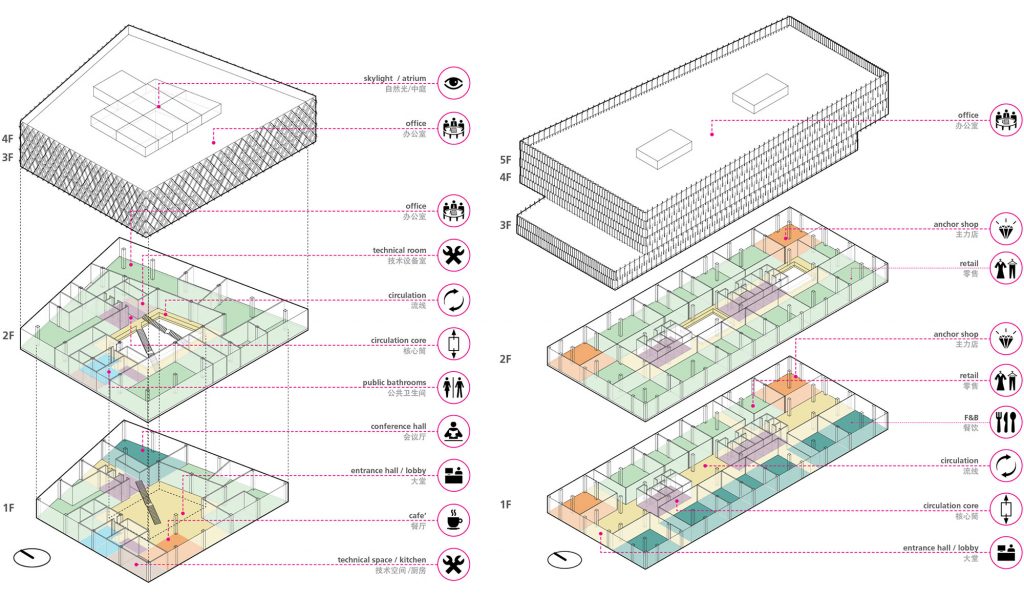 In order to give diversity to the building fronts, two different facade systems are chosen for the office buildings. Both typologies wrap around the volume creating a homogeneous facade that, despite the variations, gives a sense of unity to the entire complex. All facade systems are designed to ensure sun-shading and prevent direct light from becoming disruptive for the work environment. The buildings to the South shows a diamond-shaped glass facade with visible aluminum structure and different gradients of transparency. For the buildings along the North side of the development, the sun-shading facade is composed by vertical louvers system with different inclination. The “fifth facade” terraces and roofs of all the buildings are envisioned as roof gardens.